Rowan Atkinson - of Blackadder, Mr Bean fame.
Fairly solid/unimpeachable left-wing credentials.
(he even got scared/distressed filming the final scene for Blackadder WW1 - going over the top, wouldn't re-shoot it)

Video on Freedom of Speech, 'hate' laws - and how the intolerance to reasonable dissenting views on eg twitter, is leaching into the real world. It's from 2012. Highlight - someone getting arrested for calling a police horse gay, calling Scientology a cult - It's a brave new world lads.


Was it JS Mill who talked about all views being important in the public arena? The clash of truth and error.
If we don't have freedom of speech for even the most unpalatable of views, we are less capable of finding the 'truth'.
Also, incidentally, tear down statues we dislike, and erase bits of the past we dislike, and we're less able to learn from it.
Last edited: Jun 15, 2020 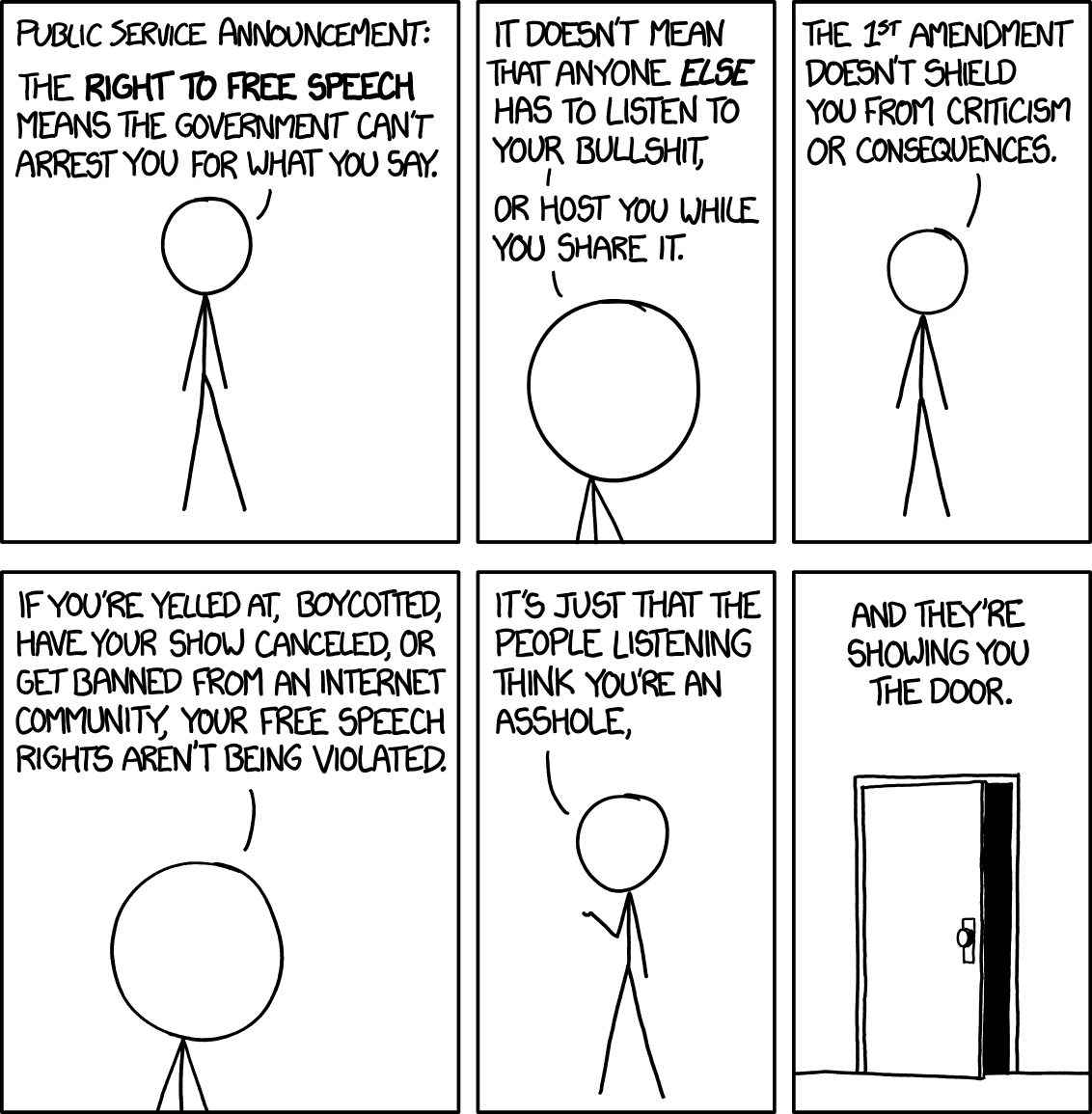 I like this explanation the most, and it does generally apply outside of americaland, its just we in australia have freedom of satirical speech.

this may or may not be relevent

On the one hand that cartoon is reasonable - no one has to listen.
But as Mr Bean says, "intolerance of people who are intolerant" is just another form of intolerance.
And it seems to lead to shutting down different opinions at Universities, people losing jobs, and ultimately things like the Charlie Hebdo attack.

As the JK Rowling trans kerfuffle shows - disagree and you're called a bigot, even racist. An insane overreaction. Rowling had the gall to say something NOT about BLM, "when the world's political focus is on the Black Lives Matter movement", and this comedy gold ensued:


“The fear, ignorance, and callous cruelty underneath JK Rowling’s words are the same sentiments that lead to the murder
and systemic destruction of black trans lives," Richards wrote. “But all white women have a choice right now: aggressively
defend a narrow, exclusionary concept of manhood that is fundamentally and irrevocably racist, or commit wholly to
dismantling white supremacy," Richards added. "JK Rowling, like many white women, has chosen the former.”
www.buzzfeednews.com/article/amberjamieson/jk-rowling-antitrans-statement​
All she said (on twatter) was: " ‘People who menstruate.’ I’m sure there used to be a word for those people. Someone help me out. Wumben? Wimpund? Woomud? Opinion: Creating a more equal post-COVID-19 world for people who menstruate."

Disagreeing with "some men menstruate" shouldn't get you yelled at and boycotted. It's not necessarily 'anti-trans' to disagree with biological illiteracy. We're either XX or XY. Seems that currently 'some views are more equal than others'. Men can be women etc is also a bit 1984, seems like double-speak newspeak to me.

The cartoon is relevant, in a sense it's difficult to argue against. But if it leads to the current climate there must be something wrong somewhere. Calling a police horse gay, scientology a cult, displaying passages from the bible - gets you arrested? That's messed up.

Our civilisation/societies allowed people to think and mostly speak freely, but now some who have benefited from that freedom are demanding views which disagree with theirs should be outlawed, whether by societal pressure or law.

p.s.
was mainly posting the Mr Bean thing to show tED, as it came up on server. Though ofc, happy for anyone to comment.
Last edited: Jun 17, 2020

That police horse was naked, in public, with its Horse sized Todger on display and a man dressed as a cop riding him. Seems pretty gay to me.

When you put it like that, seems pretty gay yes.

Maybe the bloke got done for slut shaming (the horse was naked after all).

TBH the police horse should've been arrested for public indecency.
One rule for them, and another for us.

I'm suspicious of this man who was dressed as a cop riding the horse.
It's against the law to dress up as a Police Officer - nevermind what the police horse does in his private life, he should be professional at work.

It's not confined to 'just twatter' and social media ... the attitude of 'you can't say this you can't say that blah blah blah' is very strong on University Campuses in America, also in Britain. Various people get 'no platformed' because they hold verbotim views. Like Germain Greer at a UK Uni. Not that I necessarily agree with her, but it's ironic.
And insane, and dangerous. Universities ought to be teaching people how to think, not what to think.
Develop critical faculties and assess competing viewpoints.

University students will be in high places in government and the media etcetc, and will affect our societies.
Saying it is just confined to social media underestimates the prevalence of Political Correctness and what many refer to as 'lefty liberals'.
PC might sound good on paper - yeah don't offend people needlessly, it's laudable. But who defines offence? ppl get offended at all kind of ridiculous stuff. We'd also do well to remember that the origin of the term is from the USSR and referred to having to be literally 'correct', politically. One had to hold certain views, or else. Not a Very P.C. Thing to Say

How the language police are perverting liberalism.

Huxley and Orwell wrote about the manipulation of language being one of the pathways toward totalitarianism. 80 years ago. Plato had a scene in the Republic with Socrates and his mates, bemoaning over a glass of ouzo that they were the last generation that 'got it', and that the ignorant young would destroy everything they had built with their foolish new ideas - but even those old geezers had a moment of self-realization and laughed at their own vanity, conceding this is an eternal observation that every generation is doomed to make.

I guess what I'm saying is there's nothing new here, and I don't really worry that its becoming any different. Throughout history, universities have been the engine-room of rebellions, societal reformations and bloody government overthrows - but none of those (that I know of) originated in the liberal arts department, so we're probably worrying about nothing.

Social media gives us a raging sea of fragmented brain farts that otherwise have no place outside a human skull, and we have spent so long twisting ourselves into knots to somehow make sense of it all that we have missed the fact that very little of it actually impacts the real world - seriously, ask someone who has half a brain and who does not use social media, about any of these 'dangerous' ideas - their reaction is where reality lays.

In the UK, a 'sick note' is now called a 'fit note'. - Very mild example, but I find it compelling. Haven't read the Republic, but do agree with that sentiment. Rose-tinted spectacles. Also the modern world changes so fast this eternal observation is in overdrive. Future Shock.

Re Socrates - the more one knows, the more one realises how little one knows. We are all foolish, opinionated humans and aren't really capable of knowing much at all, regarding Life The Universe Everything. Except, some of us know this.
Comparing myself to Socrates, arrogant English kent that I am.

Not to be a dick (I'm a dick), and I try not to be a smart-arse, but isn't Philosophy an Arts subject. Marx, Trotsky, Bakunin studied Phil. I can't remember other names. Lenin did law (Marx too, alongside Phil.). Mensheviks, Bolsheviks were the educated classes. Peasants didn't start the Russian Rev (or if they sort of did, they didn't finish it). Educated people used their grievances and took control in the aftermath. Although in the long run since Stalin was essentially a country bumpkin, Uni. Ed. isn't all it's cracked up to be.

BLM marches where it has little relevance are a direct consequence of social media, no? People shouting at unarmed British bobbies 'don't shoot'. Christ, people are stupid.
What about politicians not enforcing lockdown rules re marches? Too afraid to be called racist because of the virtue-signalling circle jerk that is social media and (seemingly) academia? Let's take Brexit - when I listened to certain presenters on the radio, the talking point that Brexit voters were basically 'stupid, uneducated, racist, bigots' mirrors the attitudes of social media. These sort of ideas have been around a long time, the internet magnifies them. It's a great organising tool, brings like minds together, and spreads the message. These twisted knots are intertwined, the real world - e.g. Guardian paper - and the online insane-o-sphere.
- I dunno mate, maybe we can just agree to disagree on this point. No harm no foul. Life is a gordian knot, and no sword can cut it this time.


To be honest, life in the modern world where we've largely escaped subsistence and the back-breaking toil of working the land has given us an awful lot of time to think think think, theorise, and twist ourselves into knots. And neat little narratives of 'how things are' 'how Life is' are incredibly compelling. Much easier than having to think for yourself too. Ironically.

p.s.
can someone post a funny picture or cartoon to provide relief from my text walls, pls
Last edited: Jun 21, 2020

Its leaving the matrix though Ted.... more frequent cases of Social Media bubble thoughts being actioned in the real world. Thoughts become actions... someone loses an opportunity they rightfully should have because they're not black (enough)

A homeless busker gets assaulted for supporting a local politician by a small group of inner city Leftist protestors and people are banned from a popular chat website for talking about it - with the reason given that because it didnt appear on the 6pm news it can't have happened. The logic was that "Everyone has a phone these days and it would've made social media if true' - basically reinforcing the disconnect these people have with the real world, contravening opinions of themselves, and reality in general. We saw it happen, which is a strange position to be in as this is worth less than the narrative in the social media sphere where we see Nu-Lefties performing incredible feats of mental gymnastics to prove their "point" and avoid colliding with said reality.

I sit solidly in the centre and can't help but consider the majority of this pervasive destruction just another attempt at furthering the victimhood narrative with the end purpose of gaining additional benefits.
The more you try to understand and subsequently reason with the Nu-Left the more dangerous it becomes. If you don't 100% share, love and agree with their perspective you are 100% likely to be attacked, shamed, vilified and de-platformed. This is the calibre of debate the universities are giving us by pandering to the leftist agenda and it is furthering the inability of many wet bus-ticket Leftists to be disagreed with and be able to cope. This is why they need safe spaces - their identity is tied with the opinion Du Jour and they cannot cope with a reasonable or logical challenge to it - so they massively over react and attempt to destroy the opposing PERSON, not the viewpoint. This happens in real life, frequently and constantly. But the worst facet of this new leftist thinking is the bare faced dishonesty that fuels it. There is no truthful orbit or code of conduct whatsoever. Its a free ride and they aren't paying, ever. There are similar traits among the Righties but for some reason, they just don't seem to have the destructive desire of the left as it goes. There seems to be a strong Fascist/Totalitarian theme reinforcing itself.

The Unabomber's manifesto is a fascinating prediction of the Leftist mentality we are seeing today along with the intrusion of Social Media and technology. Well worth a read. Just don't do what he did.
You must log in or register to reply here.
Share:
Facebook Twitter Reddit Pinterest Tumblr WhatsApp Email Link
Top